This unlikely novel was initially ventured with apprehension. I'm an intellectual who trends towards urban fiction for kicks. When a Caucasian author depicts Black characters in a prison setting, I impulsively clutch the invisible dreads locs I cut off years ago and prepare to sing a Kendrick Lamar refrain. Usually, such portrayals are rooted in one-dimensional caricatures like those synonymous with 1970s Blaxploitation films, but as the pages turned, I quickly embraced EA Luetkemeyer's attention to detail and his intentional nuances.

Black inmates like Botha, Stan the Man, and Mother Goose were just as flawed and multilayered as their White counterparts, Berserker, Wilbur, and Dr. Dick. I also saw possible etymological influences of prison slang on the language of the streets while digesting the mini sagas embedded throughout. By the time I made it to the end, I felt like my reading experience was equally entertaining and educational in terms of prison and the imprisoned. Penitentiary Tales: A Love Story by EA Luetkemeyer allows you to enter hell and return unscathed. 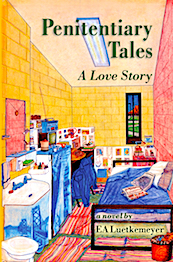 Released in 2019 by Laughing Buddha Books, Luetkemeyer risked a no-holds-barred look at a world that is mostly out of sight and out of mind to the American public. In this insightful jail-tale, the illusion of the American Dream surrendered to the reality of an American Nightmare—a shadowy prison-culture that operated autonomous of mainstream society.

In a brief provided by Amazon.com, "Penitentiary Tales: A Love Story recounts the escapades of Dean Davis, a thirty-something, educated, straight white male from the affluent community of Sausalito, in Marin County, California, who is sent to an Illinois prison dominated by a daunting, ethnically diverse population of inmates from the mean streets of Chicago. His wife Lucy and infant daughter Lola await on the outside. Lucy pleads that Dean not let the experience change him, that he be the same man when he gets out that he was when he went in. 'I'll be a ship in the night,' he assures her. 'Just passing through. When I walk out those gates in five years it will be as though I had never been there.' But he doubts if this is true."

The San Francisco Bay area author illustrated the incessant sensory overload that constantly bombarded inmates. The angry ambience of ill noises added a layer of distraction to an already incoherent enclosure of concrete. Boomboxes constantly blared hip hop, rock n roll, and everything in between—from Frank Sinatra to Steve Wonder. Inmates constantly bickered, argued and verbally threatened each other as the a respected mode of communication. Added to that cacophony was the constant threat of racial riots and sexual subjugations. It's prison folks, who invited Emily Post?

Consistent with prison culture, there are threats of abuse and/or rape, and an abundance use of the n-word. The latter begs one to wonder if that usage is the character's ignorance or the writer's subtle respect lack? The dialogue between characters was devoid of quotation marks—possibly a nod to an author referenced in the book, Cormac McCarthy, who was known for his lack of punctuation. These unmarked conversations between the characters ebbed and flowed seamlessly with the narration. It took getting used to, but the lack of quotation marks did not take away from this story.

Central to the plot, and perhaps an autobiographical "peek," main character Davis immerses himself in personal literary pursuits like journaling and writing stories. His love of the written word affords the opportunity to be introduced to the works of Iceberg Slim and interviewing various inmates regarding their candid views on homosexuality for a professor who taught anthropology at the correctional facility. And although the prison cells were stagnant and static in purpose, their occupants were constantly coming and going—sometimes by circumstance, sometimes by death and old age, but rarely with warning. They were moved around as easily as cards being reshuffled in a deck.

Luetkemeyer deftly used a series of interconnected short stories to give a captivating look at life on the inside. For those who are curious, there is a lot to be learned from this work of fiction. For better or for worse, the complexities of homosexuality, racial segregation, and various methods of escapism are given a literary spotlight. The author's own four-year-bid in an Illinois prison in the 1980s brought authenticity to the story while earning an MFA in creative writing from Lesley University in Cambridge, MA ensured quality storytelling. Together, the school of hard knocks and the halls of academia, perfectly served Penitentiary Tales.

Return to the Penitentiary Tales page